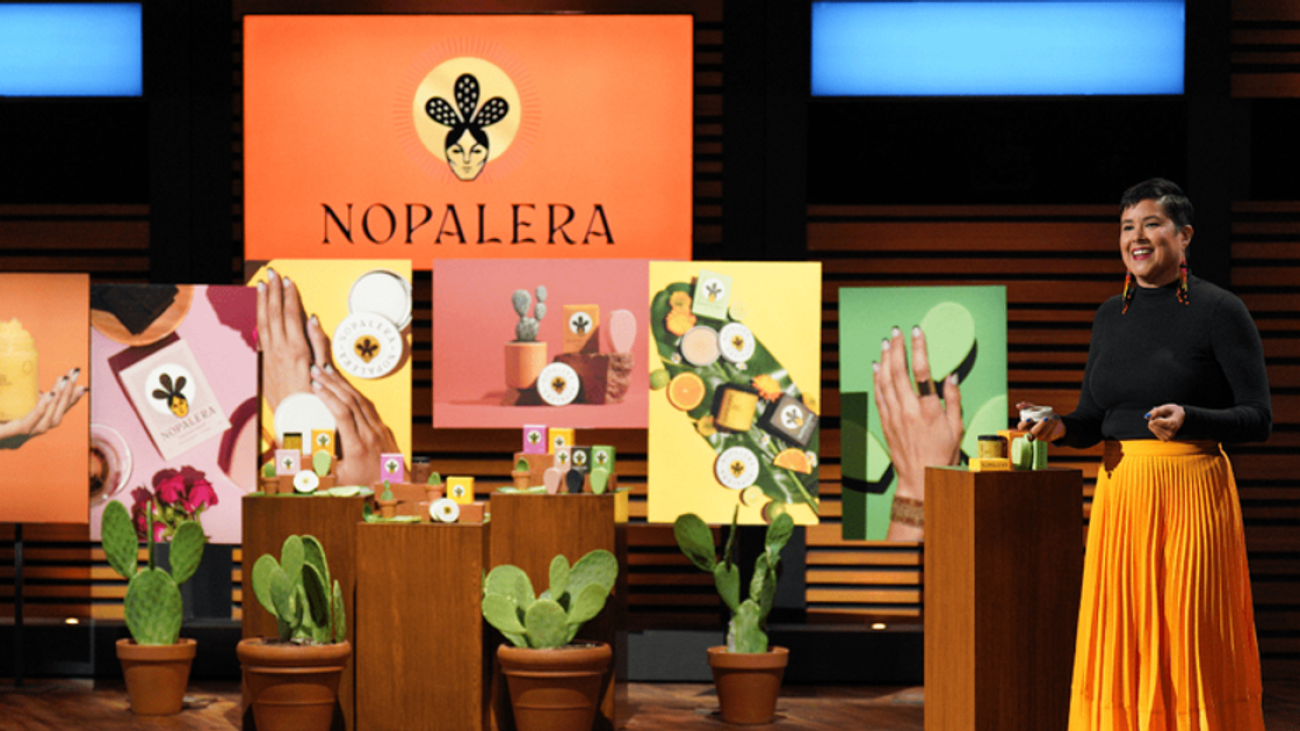 LOS ANGELES, CALIFORNIA: Who doesn’t like to take good care of one’s skin and body? Smelling and feeling good is something one looks for while buying any skin care products. Moreover, nowadays beauty enthusiasts, as well as normal people, are leaning more towards organic products, made from natural substances. Mixing Mexican culture with sustainable products, Sandra Velasquez has launched vitamins loaded artisan bath and body products Nopalera.

The cactus-based product Nopalera includes nopal cactus aka prickly pear as the major ingredient. Nopal cactus grows abundantly in Mexico. Its most beneficial effect is to provide nutritional and healing properties. The nopal cactus’s benefits were most utilized back in Aztec civilization. Therefore, bringing back the roots of the Latin culture, Velasquez will be presenting her brand in ‘Shark Tank’ Season 14 Episode 12 to Sharks Kevin O’Leary, Mark Cuban, Daymond John, Robert Herjavec, and Lori Greiner. While we will have to wait and watch to see how Sharks feel about this beauty brand, in the meanwhile, you can learn all about Nopalera, and its founder Sandra Velasquez here.

Kinfield on ‘Shark Tank’: What is the cost, who is the founder and all about bug spray that doesn’t stink

Wildwonder on ‘Shark Tank’: What’s the cost, who is the founder of flavorful gut-healing sparkling drink

Maintaining healthy and glowing skin takes a lot of effort. At least, that’s what many believe. But, the same theory is soon going to fade away when Velasquez introduces her bathing and body brand Nopalera. The beauty brands have a bundle of self-caring products in the line – from exfoliating to moisturizing.

“Nopalera was founded to elevate and celebrate Latin culture,” states the brand’s website. The products of this skincare brand are “inspired by the beauty and richness of Mexico.” Supported by an ancient symbol of Mexican culture, the nopal cactus, Nopalera is made of one of the most sustainable, nourishing, and versatile plants in the world. Nopal cactus is a plant that provides hydration to skin and hair. One can eat it and even make textiles from it. Therefore, extracting all the needed goodness from the plant, Velasquez came up with the idea of glorifying beauty with its products. Nopalera’s products include exfoliants, soaps, botanical bars, bathing sets, and even t-shirts and tote bags. All the skin-essential products of Nopalera include soothing properties.

The exfoliants and botanical bars of Nopalera are vegan, cruelty-free, and palm oil free, containing no fragrance or dye. One can easily use this product on a daily basis for deep cleansing and moisturization of the body without any fear of allergies or irritation. The easy-to-hold soaps of Nopalera are made with a high concentration of plant butter and nourishing oils that is good for even sensitive skin. The real lemongrass oil adds a refreshing scent to the body. Moreover, Flor de Mayo cactus soaps contain real jasmine oil, with a hint of delicate fragrance and extra creamy lather. The subtle eucalyptus smell of Noche Clara Cactus has activated charcoal in it that gently exfoliates the skin and kills the bad bacteria. Protecting skin’s natural moisture, Nopalera products buff your skin with humectants, improve the elasticity of the skin, and stimulate cell turnover. The moisturizing botanical bars of Nopalera deeply hydrate the skin, enriching it with Vitamin E and K.

Who is the founder of Nopalera?

Sandra Velasquez came up with the benefits of nopal cactus in her brand named Nopalera. Velasquez introduces herself as a Chicana entrepreneur, someone who is a native of Mexico but lives in the United States. She was born and raised in Southern California to Mexican immigrant parents. She claims, “I founded Nopalera to celebrate my culture. Loud and proud. No apologies.” Nopales played a major role in Velasquez’s life while growing up. Her family used to grow them in the backyard and often cut them and used them for cooking purposes. Later, she explored more benefits of nopales and began using it in her artisan bath and body products. And, that’s how Nopalera was born.

Velasquez has been in the sales industry for a long time now. According to her LinkedIn profile, Velasquez started her career as a sales staff in Mast Brothers Chocolate. She then switched to HiBAR as an area sales manager. Working there for almost one and a half years, helped Velasquez get a hang of the sales industry. She then jumped to Van Leeuwen Artisan Ice Cream. She then worked with various beauty brands and gained knowledge in a similar field before launching a brand of her own.

Looking out for side income, Velasquez started looking for side hustles. She joined soap making and was instantly glorified by the idea of starting her own bath products brand one day. The idea of starting Nopalera hit when she visited her family in California. Her mother greeted her by making her favorite eggs and nopal pads dish. That was the moment when she realized of fusing the benefits of nopal with her soap-making creativity. In 2019, Velasquez started Nopalera with the little money she had. The brand was launched in November 2020. The brand is swiftly gaining recognition in the beauty industry with its out-of-the-box products.

What is the cost and where to buy Nopalera from?

Nopalera provides a wide range of soaps, exfoliators, botanical bars, bath sets, and moisturizers. The soaps cost $14 each. Moreover, the exfoliants cost $32 each, which come in two different flavors, hibiscus, and Mandarina. On the other hand, botanical bars cost $30 each. The duos costs $44 but if you buy now you can save $4 and buy it for $40. The soap trip comes in $39 after $4 off. The bath set is priced at $71 while the shark tank bundle is priced at $130. The brand also sells yellow colored tote bags with its brand logo printed on them, priced at $30. The Nopalera goddess t-shirt costs $30 and the gift card costs $25.

Nopalera is continuously growing ever since its launch. Beauty Independent reports that the bath and body care company has raised $2.7 M in seed funding. The brand comes with a $10M post-money valuation. As of now, Velasquez has 60% of the ownership of her brand, including the participation of six investors. The turnover of the brand is growing with each passing year. Nopalera doubled its turnover in 2022 over 2021. The 2022 revenue generation of the brand is calculated to be $1M, and it’s speculated to hit $5M in a year.

Velasquez claims, “I started this company with about negative $100,000. I had $80,000 in student loans, and $30,000 in personal debt. I started this business to make money, not because I had money lying around.” She made the best out of the first year of the brand’s launch all by herself.

Who will steal the deal?

Velasquez will pitch her brand to all the five sharks. She is seeking $300,000 for 5% equity in her business. It is speculated that Nopalera deal might get stolen by Mark Cuban. Although the brand’s sales numbers and profit margins will ultimately be the major deciding factor for the sharks on whether to invest in the business or not. So, let’s wait to see if the Sharks even make a deal.

‘Shark Tank’ Season 14 Episode 12 will release on January 20, 2023, at 8 pm ET on ABC. Catch the latest episode featuring products like Nutr, Brass Roots, Nopalera, and Fresco Naturales. Missed an episode? Been wanting to catch up? Episodes can also be viewed the next day on demand on Hulu. Not just that, you can also watch old seasons and episodes on Amazon Prime Video and iTunes.