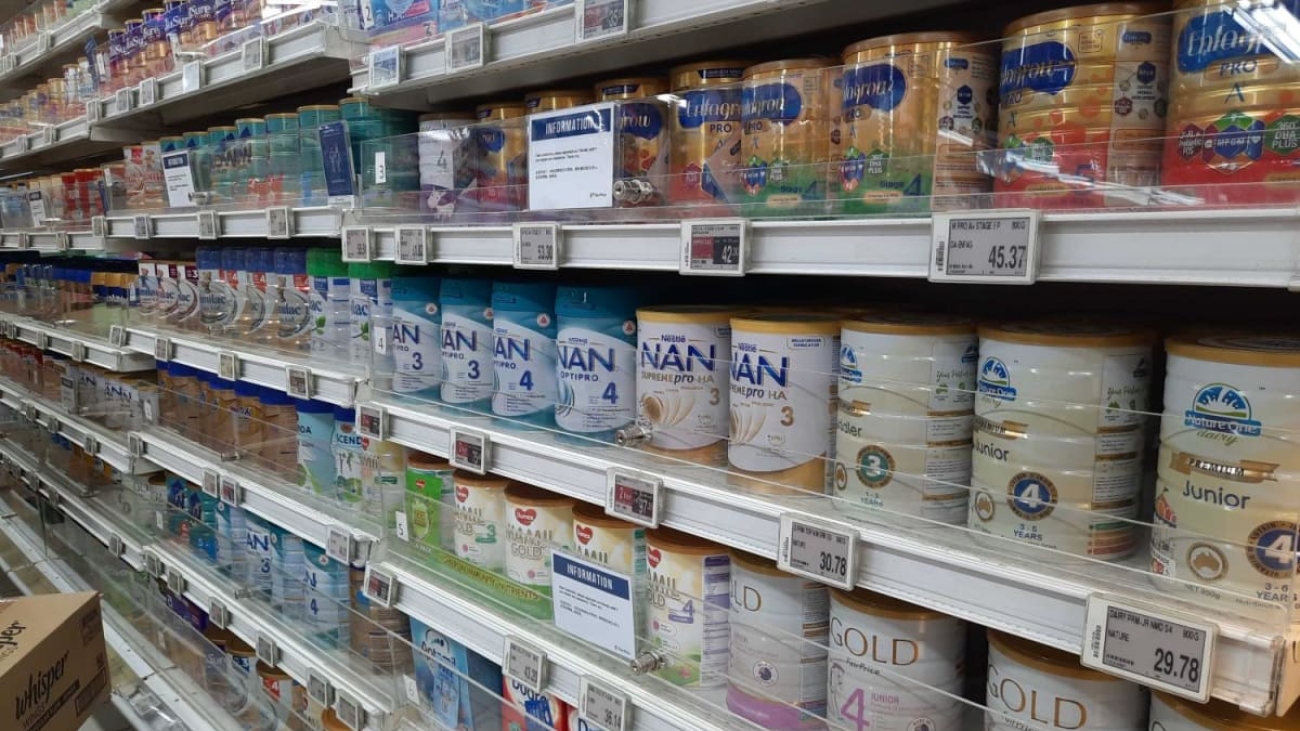 Staff that CNA spoke to at the Boon Lay Shopping Centre outlet said that the screens were installed to prevent thefts. One observed that the outlet was open 24 hours and had fewer staff in the wee hours of the morning to watch over the items.

Another pointed out that “high-value” makeup items were also behind lock and key due to thefts.

A couple seen buying two cans of formula milk had to ask an employee to unlock and remove the screen to obtain the products.

CNA could not verify when the screens were put in place at the Boon Lay store.

However, social media posts showing the secured tins of infant formula have been circulating online since Tuesday.

MEASURES NOT SEEN AT OTHER OUTLETS AND SUPERMARKETS

Other supermarkets that CNA visited in the Jurong area have not installed similar locked screens.

A Sheng Siong Supermarket outlet at Jurong West Street 42 had at least two CCTV cameras facing the shelves containing formula milk. An employee said that the store did not lock up its baby formula as there were security cameras in place.

He added that staff would conduct checks to keep stock of items and that there had been no shoplifting cases recently.

Approached by CNA, a Sheng Siong spokesperson said: “We do encounter theft cases involving milk powder in our stores.”

“Our approach is to work with the police to deter shop thefts by having our store employees put on vests bearing the words, ‘SHOPWATCH. May I help you?’ to provide assistance to customers in a non-intrusive manner.”

Apart from the Bukit Batok and Boon Lay outlets, CNA visited six other NTUC FairPrice stores islandwide – none of which secured formula milk behind screens. Most of the outlets, however, had similar signs warning shoplifters and CCTV cameras were also visible.

While the store at Chinatown Point did not lock up its infant formula, the section where the milk powder was stored had a notice stating that the premises were under CCTV surveillance for the “purposes of security, crime detection and public safety”.

Another outlet at Jalan Kayu had its formula milk placed directly in front of cashier counters and away from its indicated aisle in the supermarket.

A Cold Storage outlet at NEX Shopping Mall also did not have its infant formula behind screens.

CNA has reached out to the Singapore Police Force to ask about the number of theft cases involving infant formula from supermarkets and the estimated losses victims have suffered.