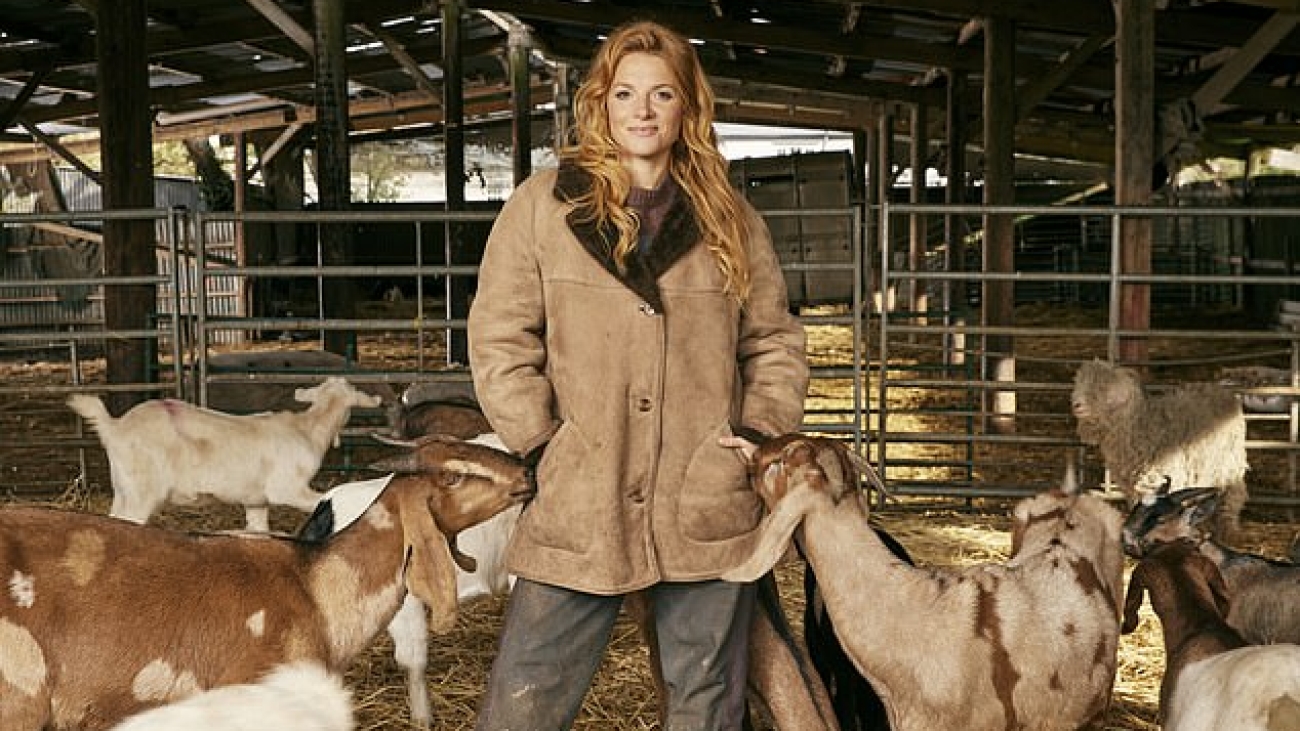 Far from enjoying a period of calm, just a month before giving birth to her first child, Laura Hodgkins found herself, in the dead of night, waddling in pursuit of 40 runaway cows.

With three still missing at midnight, she set her alarm for sunrise the next day, 3.45am, when she set off again, up hill and down dale, in search of the bolting bovines.

The pressure was all the greater because Laura’s husband, Andy, was away at a sheep farmers’ conference in Wales and the local police had been in touch, concerned the cows had wandered onto the main road and could cause a terrible accident.

‘It was horrendously stressful and one of the many times I questioned why on earth I’d given up my cosy job in marketing to become a farmer,’ says Laura, 35, who now — from a distance of more than three years — is able to laugh at the memory of that summer’s night. 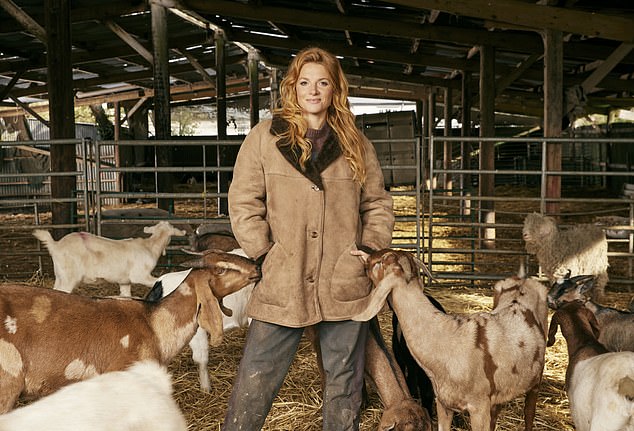 Zoe Colville (pictured) is known as the Chief Shepherdess to her 40,000 Instagram followers

‘I was cursing Andy and thinking about the maternity leave I’d have been enjoying if I’d stayed in the corporate world, where the worst thing I’d ever had to worry about was sending an email to the wrong person by mistake. There’s no such thing as time off when you work on a farm. Even in the middle of the night when you’re eight months pregnant. And it’s not quite so idyllic as it’s sometimes portrayed on Countryfile.

‘However, the good times definitely outweigh the bad. There’s the exercise, exposure to daylight and joy of working in nature — which is why I can no longer imagine ever going back to a 9 to 5 job.’

Six years after taking over the tenancy on their farm in Midhurst, West Sussex, Laura and Andy (who grew up on a sheep farm 20 miles away) have two children, Tilly, three, and Kit, one.

‘The other day I had to extricate a mouthful of sheep’s poo from Kit, which he’d found outside the door when I’d looked away for a minute,’ Laura laughs.

Known on Instagram as Girl About The Farm, Laura is one of a burgeoning band of influencers — dubbed ‘Farmfluencers’ — who share their warts-and-all tales about working with livestock to thousands of followers, most of whom are cooped up in offices and wouldn’t know a Blue Texel from a Cheviot sheep. 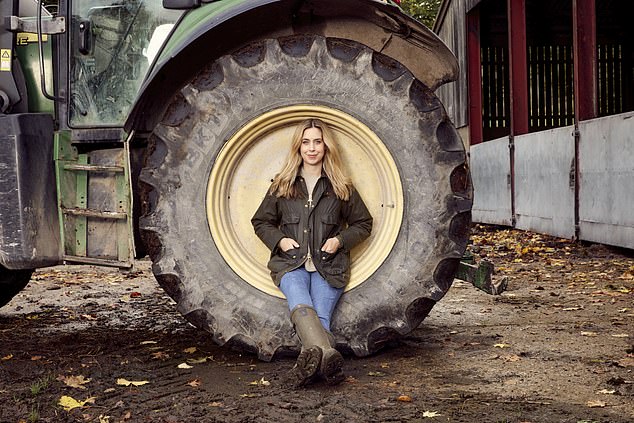 Just a month before giving birth to her first child, Laura Hodgkins (pictured) found herself, in the dead of night, waddling in pursuit of 40 runaway cows

These accounts took off in lockdown when they provided those stuck in cities, dreaming of escaping to the countryside, with the vicarious pleasure of pastures, livestock and a snapshot of life on a smallholding, no wellies required.

According to data from Zoopla, searches for homes in rural locations were up 68 per cent in 2021.

And now Farmfluencers are a trending topic again, with Will Young (@farmerwill to his 1.1 million TikTok followers) set to appear in winter Love Island — which starts on ITV tonight.

Since the cast was announced it’s been Will, a sheep farmer in Buckinghamshire, who has garnered the most attention — but not all of it has been about his buff torso.

After animal rights activists objected to his lambing videos, the 23-year-old has been pilloried online and has even received death threats — illustrating just how difficult it is for livestock farmers to do their jobs in today’s woke world.

It’s an image problem most Farmfluencers are on a mission to tackle by showing the realities of farm life in an open and positive way. Zoe Colville, aka the Chief Shepherdess to her 40,000 Instagram followers, says: ‘Friends who are very ethical dairy farmers receive a lot of abuse. I am very lucky not to have come in for much, but if someone is offensive to me online, or is critical of what we do, I don’t engage with them — I just block them.’

Zoe is refreshingly honest in her frequent updates and never shies away from telling it like it is —whether she’s wringing rainwater from her socks after trudging through swamp-like fields or revealing the troubles she and her partner, Kriss, have with dogs who have been let off their leads and then attack their flock. 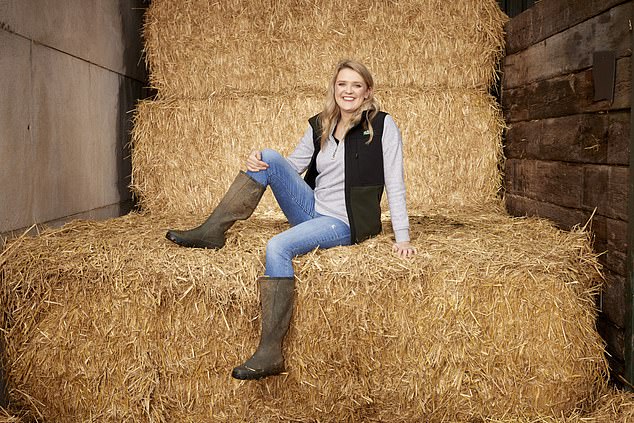 Amy Eggleston, 27, aka The Dairy Daughter, is another Farmfluencer keen to show her 21,000 followers the high levels of animal welfare she and her family uphold on their farm

Life on their 400-acre sheep farm, near Maidstone in Kent, from which they also run a small butcher’s shop, is a world away from her previous existence as a hairstylist working in London’s Soho.

Zoe, 32, and Kriss took over the tenancy on the farm four years ago. While a substantial chunk of her wages once went on the latest High Street fashion, she now pulls on a pair of dungarees over the warmest clothes she can find.

‘During my first winter I was complaining about being cold one day at the market, where we buy and sell livestock — I ended up with chilblains on my feet — and one of the older farmers tutted and said: ‘There’s no such thing as bad weather — just the wrong choice of clothing.’

‘He was right, of course, and now I wear thermals, lots of layers, hats, waterproofs and rarely feel the cold.

‘My old hairdressing colleagues struggle to recognise me in my Instagram photographs, but I remind them that I’m outside all day so I’m all about practicality these days, not glamour.’

Zoe’s wardrobe isn’t the only thing to have changed.

‘I was vegetarian for years, mainly because I didn’t want to eat poor-quality meat and preferred to spend my money on clothes than an £8 grass-fed sirloin steak,’ she says, smiling at the contrast between her current and former life.

‘Now I’m fortunate to be able only ever to eat lamb or beef that I know has been well looked after — by us.’

Amy Eggleston, 27, aka The Dairy Daughter, is another Farmfluencer keen to show her 21,000 followers the high levels of animal welfare she and her family uphold on their farm.

Amy swapped the city for country life when she gave up her job in marketing in London and returned to her parents’ farm in Leicestershire, after breaking her neck in a skiing accident in 2018.

‘I enjoyed my London life, travelling into Oxford Street by Tube to work every day, and hadn’t really considered working on the family farm, until I was injured when I was skiing in Morzine in the French Alps,’ says Amy.

‘I broke some vertebrae in my neck, which sounds a lot more scary than it was, and spent five months in a neck brace. 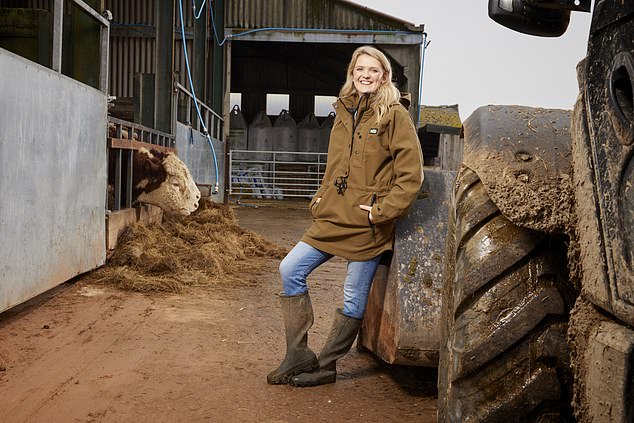 Amy swapped the city for country life when she gave up her job in marketing in London and returned to her parents’ farm in Leicestershire, after breaking her neck in a skiing accident in 2018

‘I fell back in love with the countryside, doing an outdoor job and working with animals, and just didn’t want to return to my corporate, city life — although I still miss Deliveroo!’

Amy’s marketing background certainly gave her a head-start when it came to launching her career as a Farmfluencer.

‘I started documenting things online because my city friends were fascinated by how different my life now was to theirs,’ says Amy.

‘They were enthralled by footage of me fetching the cows in from the field to milk, because it’s such a big contrast to doing a PowerPoint presentation, then nipping out to Pret A Manger for a sandwich at lunchtime.’

By the time her former colleagues are grabbing lunch, Amy has already put in a full eight-hour shift, starting at 4.30am with the first of two daily milkings of the family’s 600 cows.

The machine can take milk from up to 48 cows at a time, and by 7.30am they are all back in the fields, or, during the winter months when temperatures dip, the barn.

After several hours of grazing, the milking process begins again, at 2pm. Each cow produces about 6,000 litres of milk a year, which is sold to nearby Long Clawson Dairy and used to make Stilton.

This is all documented on Instagram, of course — from posts showing how they weigh the nine-month-old heifers in a stress-free process to videos of the cows trotting in from the field to be milked.

Zoe, the Chief Shepherdess, whose book by the same name will be published by Penguin in April, is also keen to use her social media clout to improve public perception of farming.

According to the Royal Agricultural Benevolent Institution charity, 30 per cent of farmers say that public perception is a source of stress for them.

‘Farmers were demonised for a long time — all the talk seemed to be about how cow farts are ruining the planet,’ grimaces Zoe.

‘But farming is fashionable now, and many of us are working hard to make it sustainable. For years we badgered arable farmers in our area to plant turnips and let our sheep graze their leftover wheat, while at the same time fertilising their land in a much more eco-friendly way than using chemicals — and it’s finally happening.’

The farm’s annual sheep-shearing — conducted by professionals — makes for popular viewing, while even the more down-and-dirty duties of checking sheep’s feet (which can become sore when grass is wet and long), worming, and spraying the flock’s coats to prevent flystrike in the summer attract large audiences.

And, of course, lambing season is a gloriously popular time, with tens of thousands logging on to see the woolly babies frolicking around and orphans being hand-fed from bottles.

‘We’ll be starting lambing at the end of March, and it’s hardcore. Sometimes we’ll have 40 lambs born in one day,’ she says.

‘We have goats kidding at the same time, so we’ll have five or six weeks of it being crazy.

‘If the lambs are coming out backwards, because I’ve got smaller hands than Kriss, it’s my job to help manoeuvre them around to exit frontways.

‘Sometimes we have to encourage a ewe to adopt an orphaned lamb and let it feed from her spare teat. One of the most heart- breaking things to witness is a sheep standing over her dead, motionless lamb, trying to lick it back to life.’

Not surprisingly, Zoe’s most-liked posts are the ones featuring baby calves and kids — ‘people are fascinated seeing them walking within an hour of being born’, she says — and extreme weather, which there’s no escaping on a farm, whether the fields are flooded or we’re in drought and they have to fill the water tanks multiple times a day to keep the animals hydrated.

Followers are also fascinated by how much grass a flock can get through in a short space of time.

It gives people a high-tech insight into an age-old profession. ‘Social media is great for opening the farm gates and letting people see inside — especially those who live many miles from the countryside,’ says Amy.

‘People ask questions about whether there are antibiotics in milk — there aren’t; how long a cow gestates for — nine months; and how many stomachs they have — four.’

Amy and her brother, James, 23, with the rest of the family and staff, often put in a 12-hour day before clocking off around 4.30pm.

‘My family have been running our farm for more than 100 years, starting with my great-great grandparents,’ says Amy.

‘I’m not sure any previous generations of women were as hands-on as I am, and I hope my ancestors — who would no doubt be baffled by me sharing the ins and outs on social media — would also be very proud.

‘I feel incredibly fortunate to spend my days outdoors, getting plenty of exercise and working alongside the animals, as well as my family.’

The tens of thousands who now log on for daily updates from Farmfluencers such as Amy seem equally grateful to be invited along for the ride.