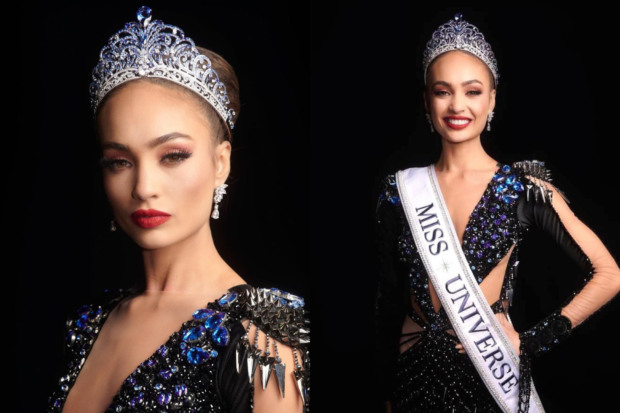 R’Bonney Gabriel of United States was crowned as Miss Universe 2022 at the New Orleans Morial Convention Center in New Orleans, Louisiana in the U.S. on Saturday, Jan. 14 (morning of Jan. 15 in the Philippines).

The Filipina-American beauty queen bested 83 other candidates, including Philippines’ bet Celeste Cortesi who failed to advance to the semifinals. Gabriel, whose victory brought the US its ninth crown, succeeded Harnaaz Sandhu of India, whose reign lasted for more than a year.

Gabriel is also the first Miss Universe winner as it entered a new era under new owner Anne Jakapong Jakrajutatip, and the first one to wear the “Force for Good” crown.

During the final question-and-answer round, Gabriel along with Venezuela’s Amanda Dudamel and Dominican Republic’s Andreína Martínez, were asked the same question: “If you win Miss Universe, how would you work to demonstrate this as an empowering and progressive organization?”

Pageant fans erupted into cheers when Gabriel said that she hopes to be a “transformational leader” who wants to use “fashion as a force for good” during her Miss Universe reign.

“I would use it to be a transformational leader. As a very passionate designer, I’ve been sewing for 13 years, I use fashion as a force for good. In my industry, I’m cutting down on pollution through recycling materials when I make my clothing. I teach sewing classes to women that have survived from human trafficking and domestic violence. And I say that because it is so important to invest in others, invest in our community and use your unique talent to make a difference. We all have something special, and when we plant those seeds to other people in our life, we transform them and we use that as a vehicle for change,” she said.

Gabriel, who will turn 29 years old on March 20, became the oldest Miss Universe titleholder after her coronation. The record was previously held by fellow American Brook Lee who was crowned as Miss Universe 1997 at 26 years.

She also opened up about her age during the pageant’s question-and-answer answer portion, saying being 28 is a “beautiful thing.”

“I would like to see an age increase because I am 28 years old. And that is the oldest age to compete. And I think it’s a beautiful thing. My favorite quote is ‘If not now then when?’ Because as a woman, I believe age does not define us. It’s not tomorrow. It’s not yesterday, but it’s now the time is now that you can go after what you want,” she said.

Prior to the coronation night, the 28-year-old stunner is also a favorite among pageant fans because of her Filipino roots. The Texas native was born to a Filipino father, doctor Ramon Bonifacio Gabriel, who emigrated to the U.S. from Manila at 25, and American mother, Dana Walker.

Gabriel talked about her Filipino heritage in a July 2022 interview with U.S.-based media outlet Houston Life, saying she wants to use her platform to inspire Filipinas “to go after pageantry.”

“It’s an honor because I’m getting messages… on social media from Filipina women, Filipina girls telling me they’re so excited. They’re [also] happy and crying tears of joy because they are inspired to go after pageantry, like I’m paving the way for them to just go whatever they want,” she said.

As of this writing, her victory makes her the first Filipino-American to win the Miss Universe title.

The beauty queen also thanked her Pinoy supporters after her coronation, as seen in a report from ABS-CBN News.

“Maraming, maraming salamat sa lahat ng tulong niyo (Thank you very much for all your help). The support is everything. I feel it in my heart. The Filipino blood is so strong. We are hardworking, we are fun, and we are determined. I am so proud to be a half Filipina,” she said in the report.

Gabriel’s victory proved that the U.S. has been a Miss Universe powerhouse since the pageant’s birth in 1952 with nine crowns under its belt.

As seen in her spectacular pageant looks, it’s clear to fans that Gabriel has an eye for fashion — and according to her Miss Universe biography, she’s the lead sewing instructor at Texas-based non-profit design house Magpies & Peacocks.

The Fil-Am stunner also described herself as an eco-friendly fashion designer who “fell in love with constructing designs with fabrics and textiles” at 15 years old. Prior to winning the title, she’s the CEO of her own sustainable clothing line, R’Bonney Nola.

Gabriel’s design house prides itself on using fashion as a “force for good” through sustainability and community impact. She also teaches sewing classes to women who survived domestic violence and human trafficking.

Hours before the coronation night, Gabriel shared a glimpse into her cape that she used at the preliminary and finals on her personal Instagram account. Her swimsuit cape, which candidates had the privilege of turning as their own, featured eco-friendly materials such as plastic bottles and sustainable dye.

“Sustainably dyed and designed using plastic bottles, I gathered and transformed this cape to showcase how art can be made out of what we perceive as trash. It also embodies my favorite message of ‘If Not Now, Then When,’” she said in the caption.

One Filipino designer to another

The effortlessly sexy piece was created by Filipino designer Rian Fernandez, and it features a velvety material, deep neckline, figure-hugging bodice, and blue sapphire swarovski stones from its shoulder pads to its train.

On Instagram, Fernandez also described the gown as a “vivid portrayal” of a queen, adding that it shows off Gabriel’s “strength and remarkable resilience.”

“The black onyx and the glass mirror drops are symbols of reflection and self growth. The fringe skirt depicts the movement of life with blue sapphire swarovski stones that stands for the new era of emerging women. Truly this piece is a vivid portrayal of a phenomenal Queen,” he added.

Gabriel can’t help but gush about her love for ensaymada when she was asked about what she wants to do after being crowned in an interview with JKN18.

The Filipina-American revealed that ensaymada is her “favorite Filipino” treat that she wants to eat shortly after being crowned.

“First thing I would like to do is sleep more than four hours and then eat some ensaymada, that is my favorite Filipino treat. And I would love to give my family and friends a hug and just thank them for getting me [into the pageant],” she added. EDV

Don’t miss out on the latest news and information.