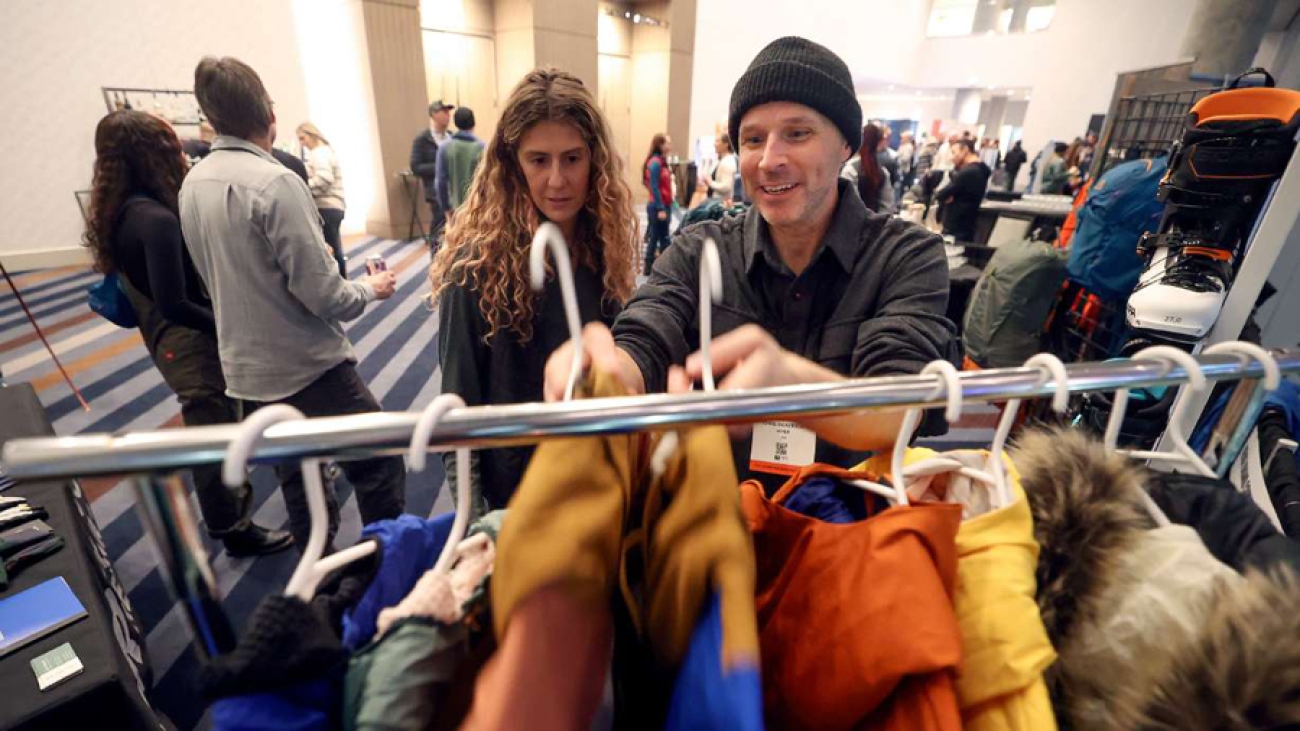 SALT LAKE CITY — There are a handful of outdoor retail trends heading into 2023.

Clothing and accessories, for example, are becoming lighter, warmer and more eco-friendly due to new advancements in the manufacturing process, said Monica Ebert, a business development manager for the Woolmark Company, which works with Australia’s thousands of woolgrowers to develop and market new wool products.

“(We’re) showing that wool is more than just that scratchy jumper that so many people think that it is. It can be a very soft, very comfortable base layer and really push the dial on how lightweight it can be,” she said. “We’re continuously innovating with manufacturing partners to continue to go lighter and lighter with those technologies.”

Woolmark is just one of the emerging — or growing — outdoor product trends. Here are five of the several new products that are on showcase this week at the Outdoor Retailer Snow Show in Salt Lake City, which may make a splash this year.

The rise of Merino wool

Merino wool, which uses natural fiber grown by Merino sheep, isn’t new but is certainly on the rise because it’s lightweight, comfortable and surprisingly warm for how thin it is. It’s what many of Woolmark’s newer products use to provide what consumers want from clothing brands, Elbert explained.

This trend doesn’t appear to be going away anytime soon, either, which is allowing for potentially new names in the market. Artilect Systems Clothing and Tracksmith running shoes are two of the brands outdoor enthusiasts may hear more about this year as those companies expand with new technologies in the market, she adds. Monica Ebert, a business development manager for The Woolmark Company, holds up an Artilect Systems shirt made from Merino wool during the Outdoor Retailer media preview at the Hyatt Regency Salt Lake in Salt Lake City on Monday. (Photo: Carter Williams, KSL.com)

“More and more (brands) want natural fibers to meet the needs for a wide range of performance categories,” Elbert said. “Brands that haven’t traditionally used Merino wool (are) starting to implement that into their product collection.”

An e-bike with growing battery power

Electric bikes are another major ongoing trend that shows no signs of stopping in 2023. The firm Research and Markets estimated last year that the e-bike market had grown to $49.7 billion in 2022 — and that it will grow another 10% over the next five years.

But since the technology is ever-evolving, consumers may dump one bike for another in a year or two, just to find longer battery life or a better product than they originally purchased. Scott Colosimo, CEO at Ohio-based LAND, argues there are many “cheap throwaway products” in the e-bike world, which is behind this problem.

LAND’s answer is a new e-bike that runs on interchangeable battery packs. This allows a bike owner to swap out their battery whenever it’s in need of being replaced, or whenever there’s an advancement in the technology that allows for longer life. The battery packs also have the capability to recharge other electronics.

The company’s latest pack allows for up to 120 miles of range, which can be recharged through an outlet or by solar power. It has a lifespan of about 10 years, as well.

There’s also a software component that allows the bike to transition from a Class II e-bike with a top speed of 27 mph, all the way up to an e-motorcycle with a top speed of over 70 mph, meaning that it’s more than just an e-bike. These modes can be changed in a smartphone app, so a parent can ensure their child isn’t using the top-speed mode, Colosimo adds.

This software also allows an owner to track where their bike is at all times on their phone, in case it’s ever stolen. Of course, all of this means LAND’s e-bikes are more expensive than other e-bikes on the market. The company’s e-bikes range anywhere from $7,800 to $11,000; however, Colosimo argues the bikes can last far longer than any of the battery packs.

“Buying a product that you’re throwing away every one to two years is not a market we really want to get into,” he told KSL.com. “You can get into this and you can keep moving up with your skill level.”

Up your avalanche safety game

Avalanches are a threat that mountain recreation enthusiasts face every winter, especially when heavy snow falls on top of weaker base snow, which has been Utah’s case for the past few weeks. This is why the Utah Avalanche Center recommends that people have safety equipment like shovels, airbags and transceivers whenever they are out in the mountain backcountry.

The French company Arva Equipment, which has an American distribution base in Orem, is launching a pair of new products that enhance avalanche safety technology. First, there’s a new transceiver with an improved range of 80 meters (about 263 feet) and 90 meters in analog mode. This runs about $419. There’s also a new airbag backpack with more lightweight materials and a lighter carbon fiber canister, which costs between $700 and $800. Jeremy Jolley, Arva’s U.S. sales manager, said the carbon fiber canister is common in Europe but it’s new to the U.S. because it only recently cleared its last regulatory transportation hurdle. These canisters can be refilled at a handful of Utah outdoor recreation businesses.

While both products improve avalanche safety technology, Jolley adds that neither is a substitute for eliminating risky outdoor behavior. He cautions consumers to follow safety protocols, such as avoiding steep terrain, when avalanche danger is high.

“We don’t want people to have a false sense of security and maybe go into terrain they normally would not enter,” he said. “This is another piece of equipment that can hopefully increase your odds of survival.”

A new way to communicate outdoors

The product is a walkie-talkie, in nature. All users need to do is sync their devices before an outdoor adventure and they are able to talk with one another through a “secure mesh radio network” instead of cellphone service or Wi-Fi, according to the company. The current range is “at least” a third of a mile in distance, though the company is testing wider ranges, its website says.

Peter Celinski, CEO at Loose Cannon Systems, explains that outdoor action sports are the company’s primary target market. For instance, skiers can communicate with one another even if someone in the group ends up well ahead of the pack. “The idea of Milo is that you can have a natural, hands-free conversation without having to stop, without having to pick up a push-to-talk walkie-talkie button,” he said. “It just really keeps things as simple as possible, as natural as possible so it’s not to get in the way of what you’re actually out there to do, which is to have fun with your friends or family on the slopes.”

Milo only recently entered the market after the product received a little more than $2.5 million from nearly 6,000 people when the company launched a Kickstarter campaign in 2020. It costs $250 per communication device.

Oregon-based Shwood Eyewear pioneered the wood sunglasses trend when it launched a little more than a decade ago, but its newest frames aim to stylize national parks. The new CAMP collection frames, which will be available this month, focus on designs inspired by places like Crater Lake, Joshua Tree and Utah’s Arches national parks.

“They’re really designed for weekend adventures and getting outdoors,” said s, a spokeswoman representing the company. She explained that the sunglasses are made from bean-based bioplastic with a “natural wood” inlay, which serves as a nod to Shwood’s origins. Renee Cho, with the Columbia Climate School, wrote in 2017 that bioplastics can be more eco-friendly and biodegradable in the long run than traditional plastic, though, it’s worth noting there are multiple factors that can influence ecological effectiveness.

Meanwhile, every pair of sunglasses comes with a case aptly designed like a sleeping bag. The sunglasses cost between $69 and $99, depending on the lens. Rhoe adds that 5% of all proceeds are donated to local organizations that support the featured national parks.