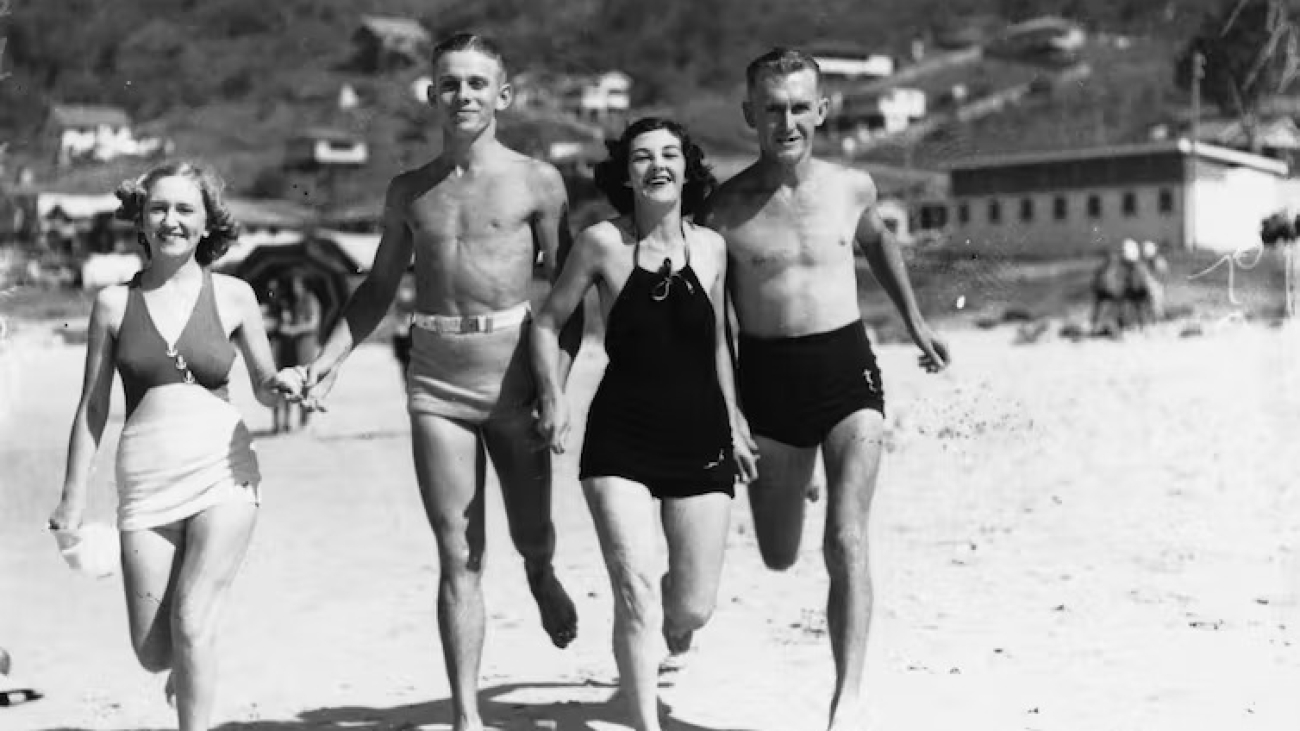 With concern mounting over microplastics and the search for sustainable options, the woollen swimsuits of the past could be the swimwear of the future, writes LORINDA CRAMER.

WOOLLEN swimwear, popular a century ago, might soon make a splash on Australian beaches again.

In the 19th century, when natural fibres were the only option, beach-goers donned costumes made of wool or cotton. Swimsuits worn at the water’s edge or in the crashing waves transformed across the 20th century from natural fibres to sleek, high-performance synthetics.

But with concern mounting over microplastics and the search for sustainable options, the woollen swimsuits of the past could be the swimwear of the future.

Plenty who enjoyed a day on the sand in the first decades of the 20th century did so fully clothed. It was not uncommon for men to dress for the beach in three-piece suits or for women to wear gowns that fell to their ankles.

But women who ventured into the water donned belted, knee-length bathing gowns that featured bloomers to conceal the legs. Men’s two-piece bathing costumes revealed a little more, with a top extending to the thighs paired with shorts to the knees.

In the space of a couple of decades, however, swimsuits radically changed. Styles altered as attitudes to the exposure of bodies relaxed, shifting ideas around public morality.

The 1930s witnessed a rise in topless bathing for men as they adopted trunks. Some had half skirts at the front, and many sported belts with buckles to keep them firmly on the waist.

Women’s swimwear now revealed the arms, legs and back – then even more when bikinis appeared on Australian beaches in 1950. Shock rippled across the sand.

Wool on the beach

Knitted wool – rather than woven wool or cotton – fitted swimwear snugly to the body, helping it shrink in size.

For wearers of Foy & Gibson’s evocatively named wool suits in the late 1920s and early 1930s – “Sunnybeach”, “Sunbath”, “Seafit” and “Siren” among them – this knit offered comfort and freedom.

Speedo’s knitted wool trunks in the late 1930s were made to streamline men’s figures, sparking the enticing slogan: “Next to your figure Speedo looks best!”

Those with knitting skills could make their own swimsuits that decade, using instructions like those given in the Australian Women’s Weekly.

With the introduction of “Lastex” – a rubber yarn – to woollen swimsuits in the 1930s, they transitioned to even more body-hugging fits. These exuded a new kind of glamorous appeal that elevated swimwear to a “sea-ductive” (as one newspaper columnist quipped) new height.

When synthetics burst onto the market, Australians embraced the new “modern” fibres. Wool was also in short supply, prioritised for uniforms and blankets for second world war troops.

Swimwear started to be made in the so-called “miracle” fibres: nylon in the 1940s, then polyester (known as “Terylene” in Australia) in the 1950s. From the 1960s, “Lycra” (also called elastane and spandex) was blended into swimsuits. These made sleeker, slimmer, more satin-like suits.

Neoprene, a foam fabric, first appeared in wetsuits on Australia’s beaches in the late 1950s – increasing the possibilities for winter surfing. Wetsuits improved significantly in decades to follow, keeping their wearer warm by trapping a thin layer of water heated by the body.

In the pool, our Olympic swimmers tested more advanced fabrics. Those at the Sydney Games in 2000 wore the Speedo “fastskin”, with its compression fabric and replication of shark skin scales that streamlined the body in the water.

More recently, swimsuits made from recycled plastic – bottles, bags and other plastic waste – have emerged as an eco-friendly option. Some question, however, just how green these recycled swimmers truly are when reducing all plastic consumption is needed to make a difference.

We might dismiss woollen swimsuits from the 20th century’s first decades as unpleasant or uncomfortable to wear. Or we might see them as unflattering for the way they sagged when wet.

But new processes for working with wool suggest it is ideal to wear in the water. New merino boardshorts have been designed to dry in less than seven minutes. Wool is also thermo-regulating, helping the body maintain an even temperature.

It’s not just that wool options are increasingly available. As we buy and throw away clothing at alarming rates, some have embraced the natural fibre as a sustainable, renewable alternative to synthetics.

Wool is biodegradable, naturally returning to and nourishing the earth, unlike synthetics that can take centuries to break down. Clothes in artificial fibres linger in landfill, with devastating consequences.

Our growing awareness of microplastics – tiny fibres released with washing that pollute marine (and other) environments – is also driving this shift.

So is it time to rethink wearing wool as you head to the beach this summer?

Who can be trusted?

In a world of spin and confusion, there’s never been a more important time to support independent journalism in Canberra.

If you trust our work online and want to enforce the power of independent voices, I invite you to make a small contribution.

Every dollar of support is invested back into our journalism to help keep citynews.com.au strong and free.